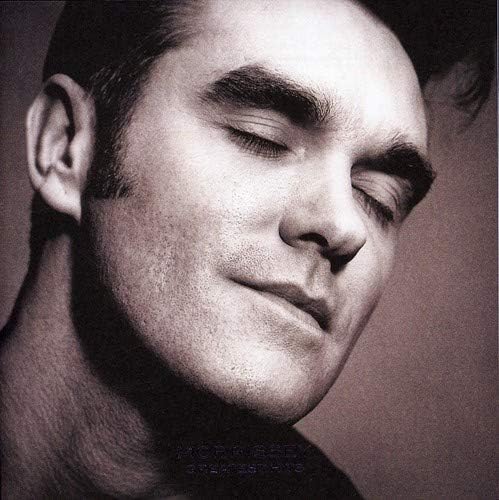 MORRISSEY Greatest Hits (2008 UK 15-track CD album featuring a collection spanning Morrisseys stellar twenty-year career as a true original including First Of The Gang To Die Everyday Is Like Sunday Suedehead The Last Of The Famous International Playboys Thats How People Grow Up All You Need Is Me and a live version of Redondo Beach [recorded at Londons Earls Court]. The picture sleeve is housed in a hype stickered jewel case)

Dear old Morrissey doesn't make it easy for himself, does he? Always one for controversy and self-importance, his recent spat with the NME only goes to show that his love of a good fight is still as vibrant as it ever was. He'll need all that energy to convince anyone other than his legion of obsessive fans to purchase this, the fifth compilation of his career - not because of the quality of the tracks on offer but because, in all honesty, who wants these tracks that doesn't already own them? In fact, almost all Morrissey fans would be able to make this album at home for the price of just two downloads - as it conforms to the now omnipresent 'Best Of' practice of including a pair of new songs.

For the record, neither That's Why People Grow Up or All You Need Is Me are anything special, though the latter has a reckless throwabout charm that suggests his next studio release - pencilled in for later this year - will be a more than worthy successor to the tantalisingly fresh Ringleader Of The Tormentors. As for the rest, the picks reflect a brilliantly pedantic approach to a Greatest Hits package that only the archly arrogant Morrissey could have. All 13 tunes are indeed hits, with nine of them having made it into the top ten. But that emphasis on making the name an absolute truth means that some of his finer singles have been left by the wayside in favour of weaker, more recent work which probably only achieved such lofty heights because of the way singles sales have slumped.

"p"Certainly, the brooding Irish Blood, English Heart, the bounce of First Of The Gang To Die and the dramatic splendour of You Have Killed Me are more than capable of holding their own next to the established excellence of Suedehead and Everyday Is Like Sunday, but to have discarded Alma Matters, Certain People I Know or the unholy epicness of November Spawned A Monster simply because they didn't make it as high up the charts as average offerings such as I Just Want To See The Boy Happy or the frankly lumpen Redondo Beach simply doesn't make sense.

Yet, that's why we love Morrissey, isn't it? Greatest Hits is neither the best starting point for a bequiffed novice or a true reflection of his 20 year career - instead, it is an exercise in sheer bloody-mindedness and anyone who recognises the singer for what he is: a genuinely enigmatic, occasionally cantankerous, eternally intriguing genius, wouldn't have it any other way. --Chris Long

Rio Tinto has been delayed at the Gudai-Darri iron ore mine, as labour shortages push peak production forecasts back in the first quarter of 2022. ... See MoreSee Less

Rio Tinto has reported delays to development at its Gudai-Darri iron ore mine in the Pilbara region of Western Australia, citing labour shortages.
View on Facebook
· Share

BHP has partnering with POSCO for sustainable steelmaking practices which may see coal cut out of the picture, following a similar announcement from Rio Tinto earlier this week.#coal #steel #ironore ... See MoreSee Less